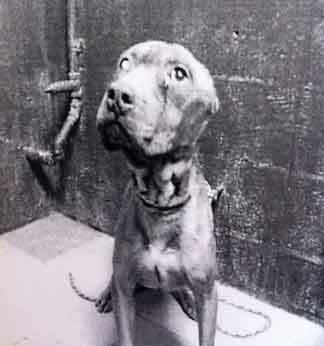 We found Handsome at a very busy shelter in the remote desert of Southern California. He had been starved nearly to death, he had a trauma to his right eye which caused him to be blind in that eye and his ears had been chopped off nearly to his skull. Handsome was in bad shape. In addition to all of that – he had PTSD. He would become severely agitated when he heard loud noises. We made sure to include that detail in his adoption bio. He spent some time in a foster home until a Vietnam war veteran saw him on our website. He immediately connected with Handsome and his story – he too suffered from PTSD. We were hesitant to move forward with the adoption at first as this adopter was located nearly 1000 miles away in WA state. However – he was persistent – and he offered to make the drive down to LA to pick Handsome up. Turns out – it was a match made in heaven and these were 2 kindred souls. Handsome lived for 4 blissful years in his forever home surrendered by love and as much food as he desired. He passed away peacefully in his sleep. RIP Handsome.