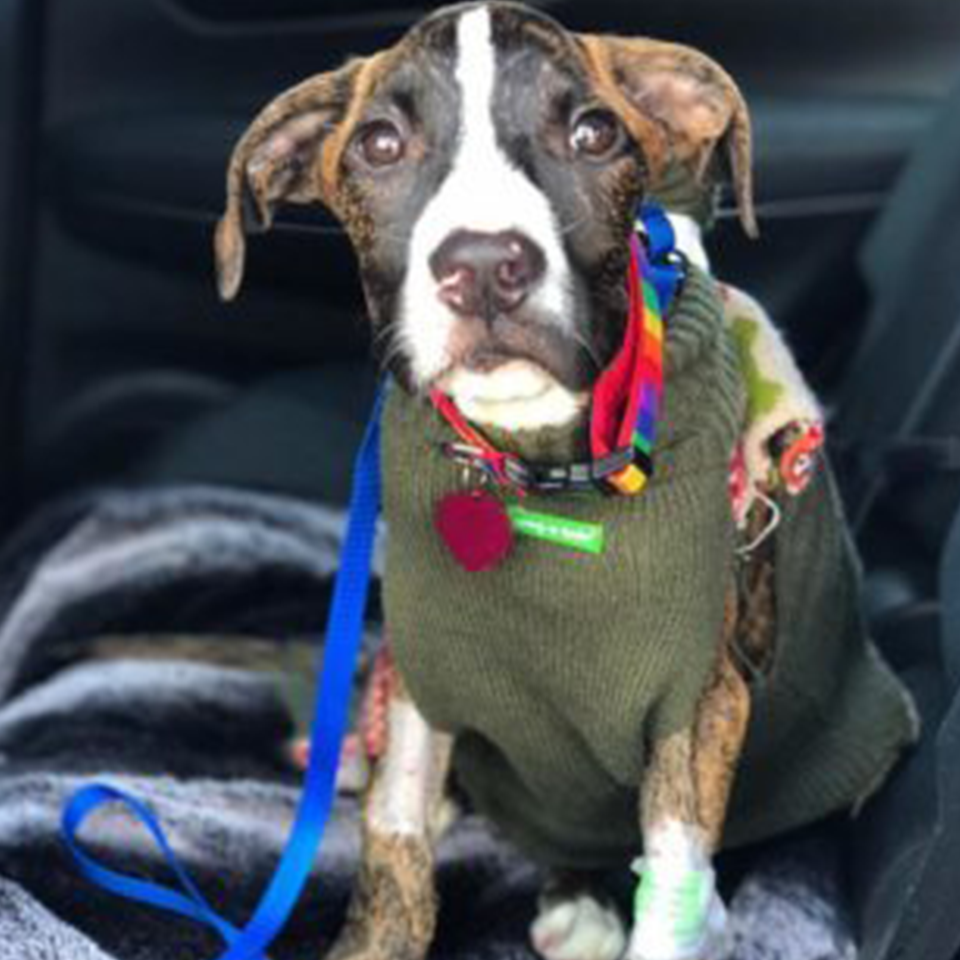 Henderson is a pitbull puppy that defied the odds. When we first round out about him he was at the Riverside shelter. He had been brought in the day before by someone who found his lifeless body laying on the sidewalk. When he arrived to the shelter he was in urgent need of medical care. Our local shelters are so busy caring for the healthy dogs in their care – they don’t have the staff of resources to care for a dog as critically ill as Henderson.
We had him rushed to a local 24 hour vet. He was too weak to even make the drive to our local vet. He was just bones, weighing a mere 17 lbs (half of what a healthy weight should be). His skin was taught on his skeletal frame, his eyes were cloudy and covered with mucus. He did not look good.
We had him tested for everything. There are so many deadly diseases that can cause similar symptoms we did not know where to begin. It turns out he had bacterial pneumonia which can be fatal in dogs – especially a puppy as weak as Little H. was. He spent 4 days in the hospital and finally began eating on his own. Finally he was sent off to a foster home to continue his recovery.
His foster mom was meticulous with his care. She even kept a food diary for him to make sure he was getting everything he needed. Some days he did great and ate well and kept everything down. Other days he would vomit and had not appetite. He was not gaining weight at a healthy rate. So we decided to take him to a specialist for more testing.
After a costly ultrasound it was determined his intestines were twisting in on itself. He needed emergency surgery and there was no time to waste. We knew it was a risky procedure as he was so weak and emaciated. But we had not choice.
Happily the surgery was a success. They were able to remove the damaged piece of intestine and stitch him back together. He spent 4 days there recovering. His gentle nature and happy personality won over the hearts of the staff there and he was even invited to join in on staff meetings.
Happy Ending, he has been adopted by his foster family. He is strong and healthy – and so very lively. Thanks to everyone who donated for his special puppy’s medical care.